From Rubbish With Love: Rome Is One Messy Mecca

Unless something is done, and soon, one of my favorite places in the world will rapidly become known as the Infernal City.

Rome has a serious garbage problem. 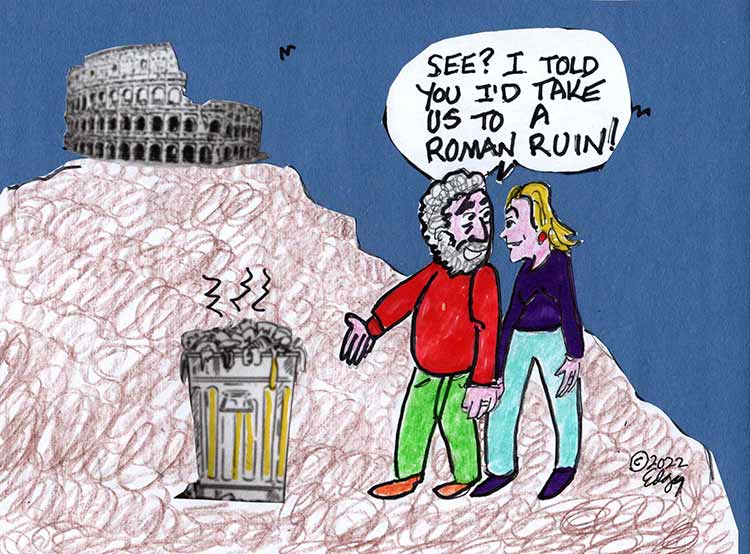 While it’s true “Rome wasn’t built in a day,” it sure hasn’t taken long for its citizens and tourists to turn it into a compost heap with better architecture. And if you adhere to that homey maxim about adaptability, “When in Rome, do as the Romans,” why, in no time you’ll be depositing your refuse anywhere you want at any time. Forget using bags or pails—city workers won’t pick those up anyway.

“Many Romans don’t see the point of showing strong public spirit while suffering with weak public services,” according to a recent Wall Street Journal piece. “People leave bags of garbage everywhere but in trash containers. One common view is that it is City Hall’s job to keep Rome clean, not Romans’.”

The reports remind me how I felt about Athens (the one they keep in Greece—not the ones in Alabama, Arkansas, California, Georgia, Illinois, or Indiana)). When I visited it decades ago there was something time-trippingly surrealistic about walking through a park and finding my path blocked by a pillar many thousands of years old, lying on its side. But also something disturbing: Didn’t the city and country treasure their monuments?

I thought perhaps the problem had abated and Greeks had come to their senses in the intervening years about their cultural assets and legacy. But no. Last year, The Guardian reported that  a new concrete pathway had been installed at the Parthenon, saying that a portion of a massive restoration project there “has been criticized by archaeologists and called ‘a scandal’.”

Nevertheless, Helena Smith—whose given name seems rather apt for her work in reporting from Athens—writes, “When seen through the eyes of Manolis Korres, the architect who has long presided over the restoration of the Parthenon, the Acropolis needs no improvement at all. In the face of such architectural mastery, he thinks of himself more as a maestro of order, making a monument that has survived explosions, fire, looting and earthquakes more understandable to the public.

“The installation of a new pathway paved in reinforced concrete across much of the hill’s open space in the name of facilitating people with disabilities has been met with dismay. So, too, has Korres’ proposed plan to overhaul the ancient citadel’s majestic gateway, or Propylaia, by reinstating a Roman staircase that would both broaden the entrance, correct previous erroneous interventions and return it to some of its original form.”

This is one of the ironic challenges of historic preservation: If a place is unsafe or inaccessible to the very people who might embrace its significance, where do you draw the blueprint on what mustn’t be changed and what needs to be? And how do you correct past errors of judgment?

We had a similar issue here in California’s capital a few years ago when the city’s nearly-century-old Memorial Auditorium required some upgrades to comply with the Americans with Disabilities Act. It turned out to be a tempest in a cupola: a few discreetly designed ramps were added, some auditorium seats were improved, the interior of the massive building was repainted and time marched on.

But the aggravation in Athens and the sacrilege in Sacramento really pale by comparison to the rubbish in Rome. I’ll admit that when I visited there, I was neither looking for nor found the alfresco equivalent of the “clean room” in a laboratory. It’s just a messy city. But it’s also a colorful, life-embracing capital, with centuries of history, art and achievement in its easily navigable, urban portfolio. Why don’t its leaders and denizens clean up their act?

Every year TIME Magazine announces the “100 MOST INFLUENTIAL COMPANIES” that are shaping our future—and 2022’s list was revealed last week. I’m so proud that my new employer, SoFi, was named as a recipient of this highly prestigious award.

As you may know, TIME’s list of 100 companies is selected through a hotly contested process. Companies from around the globe are evaluated based on criteria that include relevance, impact, innovation, leadership, ambition and success across a variety of sectors.

SoFi was considered a “new bank on the block” and “After making a name for itself via student-loan refinancing, financial-technology darling SoFi last year launched a bevy of new offerings, including a credit card, an auto-loan-refinancing tool, IPO investing options, and more. It also became the first full-service financial-technology startup to receive a formal U.S. banking license, a big step on the way to becoming a fully-fledged major bank.

“‘We’re changing what banking is and feels like,’ says CEO Anthony Noto. ‘And we won’t stop until we’re one of the top 10 financial institutions in the country.’”

As background, on March 9, 2021, SoFi announced the agreement to acquire Golden Pacific Bancorp, Inc., marking a significant step for SoFi in obtaining a national bank charter. On February 2, 2022, after receiving approval from the appropriate regulators, SoFi became a national bank.

As the former President and CEO of Golden Pacific Bancorp, I’m pleased, honored and humbled to be a part of this process. Golden Pacific Bank was selected as a partner due to its good reputation and limited risk. I am so proud of Golden Pacific, of SoFi, and of SoFi’s leadership including the impressive forward thinking CEO Anthony Noto at the helm.

Here’s to a wonderful (and influential) future for SoFi, its partners and customers! 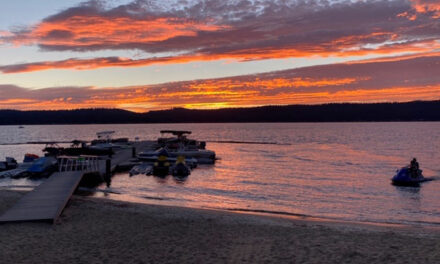 How I Spent My Summer Vacation(s) 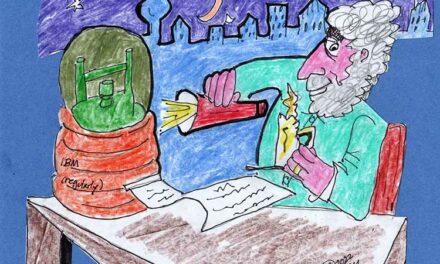