Butter Up! An Obsession Not to Be Taken with a Grain of Salt

My name is Ed and I am addicted to unsalted butter.

The first time I tasted it was in Paris in 1983. I had smeared a room-temperature pat of it on a ripped-off chunk of a sourdough baguette that was a day old (which the late great San Francisco Chronicle columnist Herb Caen wrote was the exact age one’s baguette should be for maximum crunch and flavor). 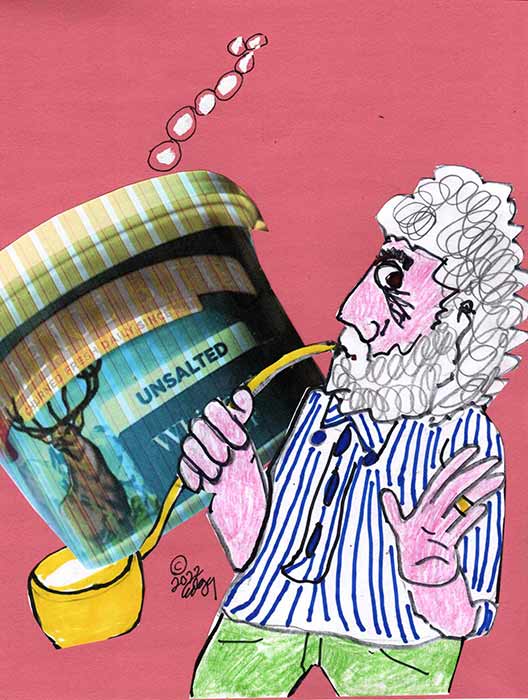 Butter not be taping this!

I was immediately hooked and began thinking of ways to get more of the stuff. I asked the waiter in my house-broken French, “Avez-vous plus de beurre (Do you have more butter?)” and, unsmiling, he replied, “Oui,” left my table and went home for the evening.

Mortified that I’d offended him—had I perhaps accidentally asked him if he’d consider wearing a stronger deodorant?—I waved down the maitre d’ and asked where I’d gone wrong. His answer was reassuringly two-fold:  (a) the waiter left only because his shift was over and another one would be assigned to my table presently; and (b) the waiter had dutifully answered my question—he indeed had more butter. I’d simply neglected to ask if he could bring me some of it.

This may be one of the reasons why, no matter how often I travel, I can never seem to earn points. (I’m guessing that the other reason is I’m too lazy to figure out how to how to ask for them.)

In any event, upon returning from my first trip abroad, with my new-found continental suavity and the beginning of a desperate unsalted-butter habit, I started to dine in as many French restaurants as I could within my regular travel orbit: in my home base of Sacramento, which had two); San Francisco; which  had quite a few; New York City, my home town, which had dozens; and Hollywood, which had a few, but were staffed by out-of-work actors who insisted on presenting the daily specials in bad impersonations of Maurice Chevalier (“Ze dally spessie-alls? Ohhoho! But of CARSE, Miz-Yore!”).

The trouble was that only in Sacramento and San Francisco did they serve the bread with unsalted butter. I was mystified but concluded that the trade unions representing the salt industry were to blame:

“Hey, nice little patisserie  ya got here, Pierre. It’d be a real shame if someone was tuh, like, reprint all da menus wit’ explanations like, ‘le pasta avec fromage is just Mac ‘n’ Cheese, an’ pomme frites‘re just French fries.’ Know what I’m sayin’? I think ya do. So salt dat pain perdu before it becomes ‘pain fer you!”

As luck would have it, I soon began to frequent a French restaurant in Sacramento called, in homage to Ernest Hemingway’s posthumously published tribute to his early days in Paris, A Movable Feast.

I felt less like a child set loose in a candy store that an addict who gets a job doing inventory in a meth lab.

Eventually, Dr. Vickers sold the restaurant and it became a delightful eatery calked Lemon Grass, which to this day features fine Thai cuisine. But no unsalted butter.

I was about to check myself into rehab—possibly the Mayo Clinic, whose name made me think it treated obsessive condiment users like me—when I discovered on a casual grocery shopping excursion a product called Challenge Butter (“Churned Fresh Daily Since 1911”). One of its signature products was (and is) unsalted butter.

So there it was, right in front of me. No prescription required. No counseling with the in-store pharmacist. And as much unsalted butter as I could fit into my car. At long last, my own movable feast. 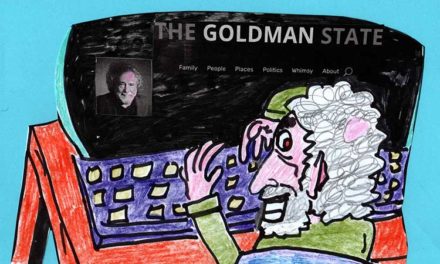 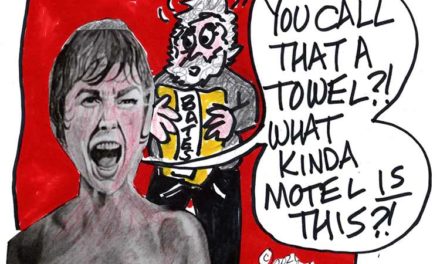 Elephants Are Lightweights as Boozers