Forecast for today’s column forecast: cool as a cucumber

Among my extensive list of idiosyncrasies is that I always keep a jar of spicy Kimchi in my refrigerator. Its contents serve alternately as an appetite suppressor and stimulant. I’m not sure why—but for me, it’s pretty foolproof. I can nibble half a forkful late in the evening and thereafter shelve any thoughts I had of putting up a rump roast as a second dinner at 1:30 a.m.

By the same token, if I steal a little crunchy bite of Kimchi around 7 p.m., it gets my stomach rumble-ready for dinner. It’s as though it unites my gastric juices in a common cause. 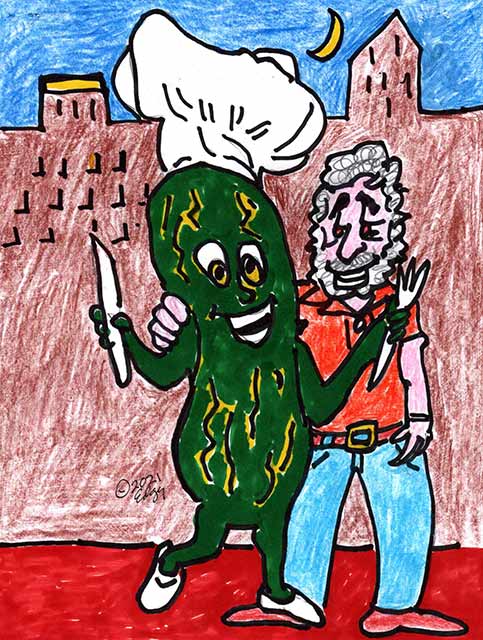 On the Town, with Mr. Pickles and Mr. Ed

So I was happy to read in a recent New York Times science article that Kimchi and a host of other fermented foods may play a positive role in one’s “gut health.”

“Fermented foods like yogurt, kimchi, sauerkraut and kombucha have long been dietary staples in many parts of the world,” the article reminds us, referencing a study conducted at Stanford University and first published in the journal “Cell,” which I’d always assumed “Cell” was a trade journal for prison wardens.

“(S)cientists are discovering that fermented foods may have intriguing effects on our gut,” the story goes on. “Eating these foods may alter the makeup of the trillions of bacteria, viruses and fungi that inhabit our intestinal tracts, collectively known as the gut microbiome.” (Doesn’t “gut microbiome” sound like an especially gory entry in the “Mad Max” series? I digress.)

Fermented foods “may also lead to lower levels of body-wide inflammation, which scientists increasingly link to a range of diseases tied to aging,” according to the study.

My grandparents ate a lot of kosher pickles. They “made” them by fermenting cucumbers in salty water, sometimes using vinegar or sugar to hasten the process along. Yet none of my forebears, all Russian immigrants and fermentation consumers, looked younger than their years. Still, let’s not rule out that fleeing from their native country’s “ethnic cleansing” or “pogroms” tends to have an aging effect.

My mom wasn’t what anyone would call a gourmet chef. For example, I didn’t realize until I left home that lamb chops and chuck steaks were different items, thanks to her cooking them to the point that poking holes and lacing them up wouldn’t have seemed inappropriate.

But she learned how to make unbelievably crispy, juicy, delicious pickles from my Grandma Molly, my dad’s mom. Once my mom seasoned the cukes, she’d store them in mason jars on a kitchen counter, where their aroma grew irresistible over the course of three or more weeks of fermentation. I still have fond memories of my dad trying to sneak one out of the jar ahead of time and my mom playfully smacking his hand away. (At least I think the gesture was about the pickles. I was pretty young at the time and my memory may have a V-chip implant of which I’m unaware. For example, I still think the film “Body Heat” was about personal climate change.)

I close with a bit of dubious trivia. The expression “in a pickle” may have first been used by Shakespeare in “The Tempest.” The first time I heard the term was when I was 12 and played baseball in the Lakewood parks and recreation league. One of the few times I managed to get on base—and to second base, no less—I attempted to steal third base and got caught “in a pickle” by the third-baseman and second-baseman, who tossed the ball between themselves as I ran toward one of them, then toward the other. One of the guys finally handed it to the shortstop, who tagged me out as I was flailing my way to third base.

Years later, a high school friend told me he’d managed to get to third base with his girlfriend, but he subsequently got her pregnant. As you might imagine, it put both of them in quite a pickle.

There are different types of bias, and the one I’m most scared of is unconscious bias—something I think I can’t correct because I’m unaware of it.

Of the types of unconscious bias, experts break it down further, and, oh no, I’ve probably got “affinity bias.”

Affinity bias is our human tendency to surround ourselves with others that are most “like” us. We hang out with others who share our particular worldviews. We are all attracted to those who share common backgrounds, or common religious or political views, or other common belief systems. But how much more interesting and peaceful the world might be if we all paused for a minute to consider that others may have a different perspective—not right or wrong, inferior or superior—but just different from ours.

Affinity bias in the workplace is detrimental. It can play out in hiring decisions, or promotion selections or job assignments. After a while, left unchecked, it can have a cumulative impact with less-than-diverse workplace and thought structure, leaving the organization at risk of poor decision-making and lapses in judgement.

How to combat affinity bias?

Start by identifying where there may be an unconscious bias. Just look around. Do others at your workplace look like you, act like you, and talk like you? What does the data say? If the response is Yes, you may have a problem.

What about raising awareness of affinity bias by talking about it? No blaming or shaming, but just thinking through with others what affinity bias is and whether or not it exists and if there is a need for deeper discussions or professional training.

Third, take action with quantifiable goals for improvement over time. For example, could there be a different approach to the hiring process? Could there be a need for reorganization? What about having discussions and inclusion at a variety of types and levels of staff?

Affinity bias may be unconscious but that doesn’t mean we can’t consciously address it.

Investment Tips for the Self-Isolating! 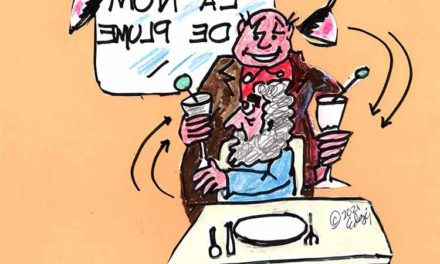 Let Me Be Perfectly Cleared

Elephants Are Lightweights as Boozers