One Florida taxidermist has a solution (no, not that)

If your dog could talk, would it ask you things like, “Does this harness make my thighs look chubby?”—or, more likely, “Are you going to finish that quesadilla?”

Apparently, we sheltering humans weren’t the only ones who put away a few extra groceries from March 2020 to March 2021, the pandemic period also known as The Year Of Living Microwavically. 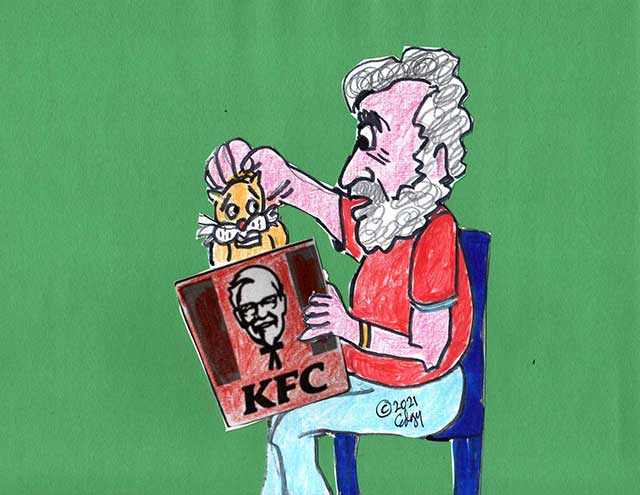 The Cat in the Fat

Our sheltering pets also piled on the pounds since, unlike before, when their masters had gone off to work each day, the masters were now home 24/7—and with unlimited cookie access.

I imagine some dogs’ egos swelled along with their tummies from getting called “good boy” several times a day and receiving reward snacks—all to justify their masters’ own frequent fridge forays.

Help is on the way. A front-page article in the Wall Street Journal early last month revealed there was a national Association for Pet Obesity Prevention. It was founded by veterinarian Ernie Ward, who also wrote “Chow Hounds: Why Our Dogs Are Getting Fatter.”

I’d always thought the only choice vets had when they opened their practices was whether they’d treat large animals or small ones. Dr. Ward has created his own medical specialty: treating small animals that become larger ones.

When I started reading the article, I was gratified to note (prematurely) that the only pets in need of a Nutrisystem consult were dogs. Obviously, I have a cat: Osborn the Magnificent, who’ll be 19 on Bastille Day and remains relatively svelte.

Then I read this part, which is disturbing on a number of levels:

“Allison Doty, 29, says her cat Cakes has always been food-motivated. Ms. Doty, a taxidermist who works from home in Inverness, Florida, her husband and children have been home most days, causing Cakes to ‘get a lot more treats.’

Okay. That was a nice mini-trip but now it’s time to unpack:

1. What chance does a cat named “Cakes” have of keeping his muscular physique—especially if he hears you also call some unquestionably delicious dessert foods by his name? Next time around, Ms. Doty, name your pet Keto or Metrecal. (For younger readers: Metrecal was a diet shake in the 1960s that tasted as though someone had pureed blackboard chalk in essential oils. But it was pretty effective: People lost many unwanted pounds by losing their lunches.)

2. Do you think it’s possible that Cakes is a “stress eater?” His master stuffs dead animals. At home. If I lived with someone who did that in the rec room, I don’t think I’d be skipping the daily Cinnabon runs, either. Perhaps Cakes thinks that if he gets really fat, he won’t qualify for a slot in Madame Doty’s wax museum.

3. Cakes lives with his family in Inverness, Florida. Can you  spot what’s wrong with that sentence? Hint: The only Inverness anyone should be concerned with is in Scotland, not Florida. That city sits where the Moray Firth—which was named for an eel that won a swimming competition—the Moray Thecond and Moray Third are farther downriver—ties into the River Ness (as opposed to the Loch Ness, home of the elusive Loch Ness Monster, a close, personal friend of the Yeti and Sasquatch). Now, this is colorful stuff.

Inverness, Florida, on the other hand, is in Citrus County. Unfortunately, that’s about the most interesting thing about it. To summarize: Cakes is bored out of his mind and overeats (a) to combat severe depression or (b) because he enjoys overeating.

4. How did Cakes develop a taste for Kentucky Fried Chicken? Did he see one of the company’s TV ads, or the former president of the United States tucking into an eight-piece Family Fill-Up Bucket Meal® on Fox News? Or did Ms. Doty, her husband and kids continually bring home a barrel or two of extra-crispy KFC and give Cakes little gizzards and bits to keep him happy? My point is that Cakes’s weight challenge seems to be a by-product of lax parenting—as, of course, are the Nazi Party, global warming, wildfires, the NRA and acne.

5. The Journal article provides a dubiously happy ending: “Cakes has maintained a stable weight lately, says Ms, Doty, by working out with a laser pointer.”

Upon first reading “laser pointer” I thought this must be a reference to an animal breed, like the English Setter Pointer or Irish Setter Pointer, and that being pursued regularly by a large hunting dog was helping keep Cakes in shape. Then I remembered that Cakes was a cat and that the Doty family was making the poor little kitty trim down by chasing a beam of light, a prey he’d never overtake. And I realized that before long, Cakes may indeed stop overeating—and become a binge drinker. 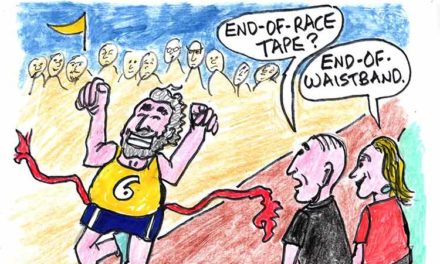 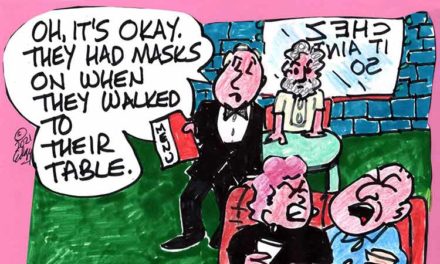 MASKING FOR A FRIEND: A PRIMA FACIAL RANT