I just entered the all-new Publishers Clearing House raffle and fully expect that next month I’ll win its “authorized prize” of “1,000 a day for life.” I’m not sure what the non-authorized prizes are but once the company starts sending me my $365,000 per annum I’m sure I won’t care. Also, this column’s rotating themes will become wealth management, yacht maintenance and advice on hiring servants.

You may not think so but my entering this competition was as courageous as it was hopeful. It’s that “for life” part of the equation that made me summon up every bit of intestinal fortitude I have left after a brutal bout of diverticulitis about 10 years ago left me with, alas, a “semi-colon” (though that incident did make me more compassionate about people who experience “periods”).

Let me quantify my bravery. When I was in my 20s, I won a call-in trivia contest sponsored by a Los Angeles radio station which played oldies by day and acid-rock by night. Often, while I was at work at the Long Beach Marina News, I’d shout out the answers to the questions, which prompted an irritable typesetter named Robbie to demand I phone the station. After his prolonged nagging, I finally agreed to. One afternoon, the DJ’s shouted question was, “Who was the second-most decorated soldier of World War II, who went on to become a Hollywood actor? I’ll take the 10th caller!”

As I was dialing, Robbie shouted out, “Audie Murphy!” I explained to him that Murphy was the most-decorated soldier, not the second most. Sure enough, I got through and on the air. The DJ screamed the question again, evidently not believing my telephone receiver was working, and I blurted out, “Neville Brand.” Brand, for those of you who aren’t TV-western buffs, starred in “Laredo,” an otherwise silly show with what a friend of mine used to call “Botany 500 cowboys” because of their precision haircuts and finely creased chaps.

Here, in fact, is how the 1965-67 show is described online: “In Laredo, Texas in the 1870s, three…Texas Rangers fight crime, seek adventure, and court the ladies. Neville Brand stars as gravel-voiced Reese Bennett, the eldest and prickliest. Peter Brown and William Smith are the handsome, young, and often shirtless rogues Chad Cooper and Joe Riley.” I think you get the picture.

Anyway, one day several months earlier, I’d read a magazine piece about Brand, which revealed his undeniably heroism as a soldier. I just happened to remember it, which is what trivia contests are all about, no? The DJ bellowed I had just won an old-fashioned bubblegum machine—then said, “And now, for a lifetime supply of bubblegum balls, what famous singer won an Academy Award for playing a World War II soldier?!”

Well, that was a no-brainer for a film fan like me. “Frank Sinatra,” I said, adding (to no one’s pleasure except Robbie the typesetter) “as Maggio in ‘From Here to Eternity.’ The guy who gets beaten to death by Ernest Borgnine, who’d go on to win his own Oscar for playing the title role in ‘Marty.’”

The DJ congratulated me on my triumph but I wasn’t done holding forth. “Sinatra was also given a special Oscar during the war,” I lectured, “for a short feature he appeared in called ‘The House I Live In.’ It was about anti-Semitism and—”

Suddenly, a very officious employee of the station—who obviously never went to the movies and wasn’t fascinated by the fact that I did—wrote down my name and mailing address so I could be shipped my prizes.

Two weeks later, only the machine arrived (it’s a beauty and I still have it). I learned that the station was about to be purchased by an all-news/all-talk/all-the-time radio conglomerate so I called and asked if I would still receive that  “lifetime supply of bubblegum balls.” I was told all the station would do is allow me to pick up a great big bag of them at a candy warehouse, which I did., When I brought the machine, filled with bubblegum balls, to the Marina News office the following day, Robbie asked how many bubblegum balls the station thought would last a lifetime. “Oh, they reneged,” I said. “They gave me a bag that will maybe last a month.” 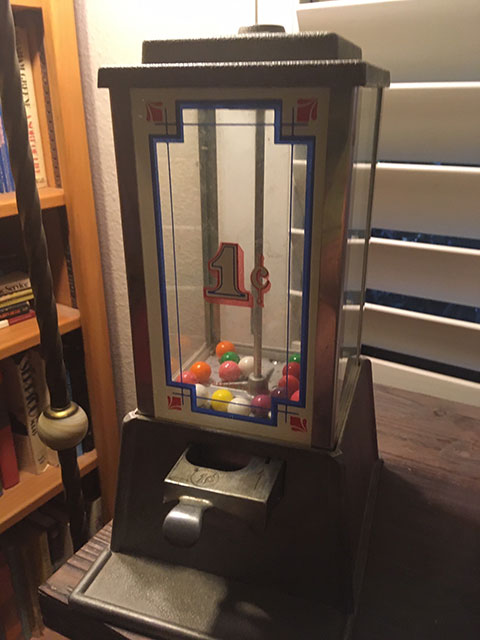 That’s when Robbie said, “Maybe they think that IS a lifetime for you, and they’re gonna send out a hitman to kill you.” Robbie could be a jerk.

But this is why my sending in the Publishers Clearinghouse entry in the hope of winning $1,000 a day “for life” is an act of raw courage on my part. That hitman who didn’t find me back then, may still be out there, waiting to honor his contract. He’s probably very old by now so I think if I can trick him into having a few bubblegum balls, I can escape while he’s trying to floss them out of his dentures. I’ll ask the servants to handle it and escape to my yacht. 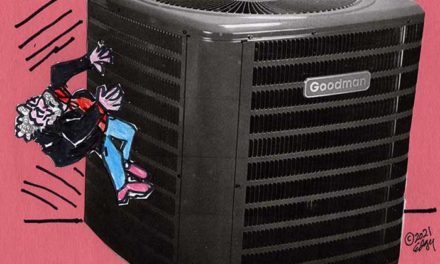 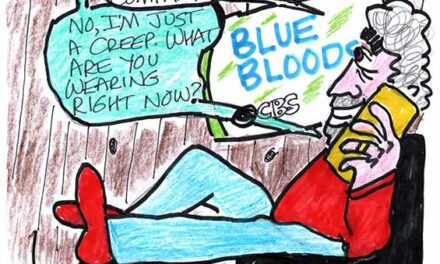