The Ice Age v. The Isolation Age: A Helpful Guide

We explore some key differences, providing fun—and education, too!

In the April 3 installment of The Goldman State, my calling our shelter-at-home era The Isolation Age apparently tickled a few readers, which in turn tickled me. It was especially nice to receive compliments from the artist Ellen Brouse, a faithful reader who lives on a peninsula on the Washington coast. More to the point, Ellen’s been a friend of mine since junior high school. She taught me back then how to improve my dancing—enough to prevent alarmed bystanders from leaving our school “platter parties” to phone for an exorcist.

And so, in my continuing effort to serve what I call the Giggle Economy, I thought I’d point out the similarities of, and differences between, the Isolation Age and the Ice Age, whose name it rather blatantly spoofs.

1. Contrary to popular thought—largely based on repeated viewings of “The Flintstones” and “One Million Years BC”—cavemen and dinosaurs did not co-exist in the Ice Age.

By contrast, if you saw news coverage of kids and families ignoring the rules of social distancing—in Florida during spring break and more recently, in churches in Sacramento and elsewhere (mainly in the South, which is where they keep Florida, thank God)—you have all the evidence you need that Neanderthals do exist in the Isolation Age.

2. Dinosaurs were reportedly exterminated long before the Ice Age. In the Isolation Age, however, two will be vying for the presidency of the United States in November.

3. A quick Google search reveals that the Ice Age “began 2.4 million years ago and lasted until 11,500 years ago. During this time, the earth’s climate repeatedly changed….”

The Isolation Age, on the other hand, began in March of 2020, during which the earth’s climate continued to change. Not for the better.

4. The Ice Age has been the subject of several enjoyable animated films featuring the voice of actor/comic Ray Romano, whom everybody loved for nine years on CBS-TV and still completely adores in syndication. The Isolation Age is also likely to be the subject of numerous films for the next several years, and rumor has it that the Corona Virus has just signed an exclusive deal to be repped by the William Morris Agency.

5. Although there’s no proof that humans existed during the Ice Age, a leisurely drive past the empty streets, restaurants, bars and parks in your town or city may convince you that humans don’t exist today, either.

This leads to the admittedly leaky theory—and I’m not talking about Louis and Mary Leakey, of course, who were authentic anthropologists and still managed to have a solid marriage—that maybe there really were people around during the Ice Age. But they stayed in their caves all day and night watching game shows.

6. Scientists tell us a number of adorable animals may have been around at the time of the Ice Age, give or take a few weeks. These possibly included scimitar cats (where the cats managed to buy curved swords is anyone’s guess), short-faced bears and flat-headed peccaries (these pig-like animals are still around. Their cousins are called “collared” peccaries, which I guess means they were either arrested or are members of a critter clergy).

Unfortunately, as previously discussed, there were no people during the Ice Age to record the animals doing wacky things. Well, we can now do that in the Isolation Age! And  we can share the videos endlessly with house-bound others—a fact that may prove our species is actively devolving.

7. Finally, other key differences between the Ice Age and the Isolation Age may be found by counting the syllables in each as well as noting the variations on how they’re spelled. I mean, even the Flintstones would know that. 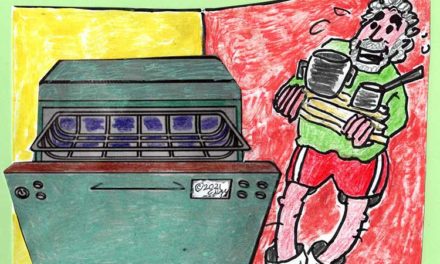 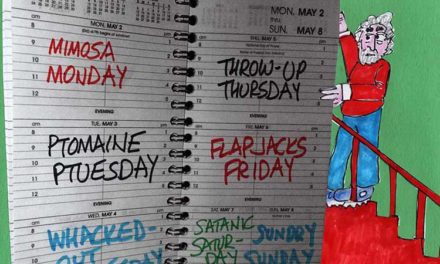