Cigarette me, Sonny,” said Elsie the Cow as I showed her into my living room. I did so right away, proffering her a menthol Emphyzeme, one of the French smokes I keep here to impress pretentious guests who correctly pronounce ”niche.” As I torched the weed, she did that sexy 1940s film noir/femme fatale thing of staring hard into my own cow-brown eyes and touching my forearm—though I should admit that her doing so with one of her moist front hooves wasn’t the mood enhancer one might have hoped for.

I knew it had been a rough patch for Elsie. Borden Dairy, her longtime employer, filed for Chapter 11 protection after a 163-run as a milk producer. It was—for Elsie, her mom, her grandma, her great grandmother and her great-great grandmother—a solid job that had been passed down from generation to generation. “It paid lousy and it made Borden very rich,” Elsie said. “You could say my family members were the company’s cash cows.” She winked flirtatiously. “But I’d rather you didn’t.”

I asked her if she’d like something to drink. “Got gin?” she cracked in obvious parody of her trade association’s decades-long ad campaign.

It had been a rough patch for Elsie. Borden Dairy, her longtime employer, filed for Chapter 11 protection.

I mixed her a dry martini and joined her on my sofa—though she really didn’t leave me a lot of room. I mean, let’s face it, she’s a cow.

“So ‘Got Milk?’ didn’t work out after all these years?” I asked as I squished myself into a sliver of couch corner.

“Udderly useless,” she said with her eyebrows arched to telegraph the joke. Cows do this instead of “air quotes” because they have neither index nor middle fingers. And at her age, I’m sure she’d also developed bursitis, fortunately rendering the obnoxious gesture futile.

“Well, what happened?” I asked after she smoked two of the European cigarettes and drank two martinis.

“SOY happened!” she said, a little more loudly than I’d expected. “Soy and almonds and God knows what else they’re going to liquify and then call it milk.”

“Why not pencil milk?” she raced on, snorting with derision—though I’m not entirely sure if it was with derision. It may just have been her normal way of exhaling. (I had dropped out of the animal husbandry class at the University of California, Davis, years ago, when I discovered it wasn’t one of the edgier courses in its human sexuality program.)

I laughed at the interior pun if that’s what it was—Number 2 being not only a euphemism for a certain toilet function but also the preferred pencil for machine-scored tests—yet that wasn’t the precise reaction she wanted. I was in pretty ambiguous territory here. So I followed it up with a frown and a head shake and said what everyone says these days when they mean to imply a self-evident truth has just been spoken: “Right?”

That did the trick. “Tell me,” she said, which has about as much substance as “Right?”

“Word,” I said, thinking it was something I’d heard some young people saying at one of the seven Starbucks stores within a half-mile of my place. She didn’t respond to that one—maybe it  was too contemporary a reference, even for me, which meant it was likely already out of date. I mentioned this to Elsie.

“True that,” she said, startling me with the urban locution. “Language and milk have something in common,” she added: “Sell-by dates.”

Product mascots too, I thought sadly but didn’t say. I figured that could have really upset her. Could even have made her have a cow. 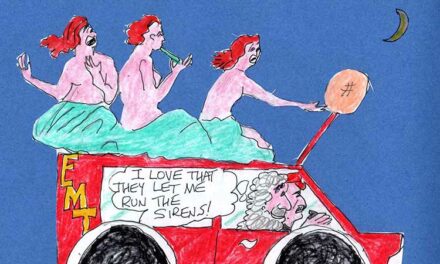 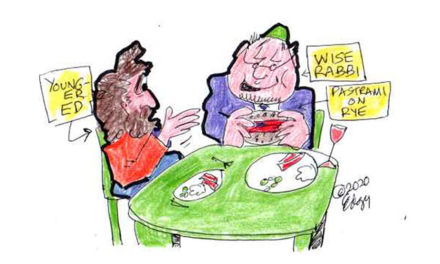 The Jewish New Year Begins at Sunset: Grab Your Oys-Maker!